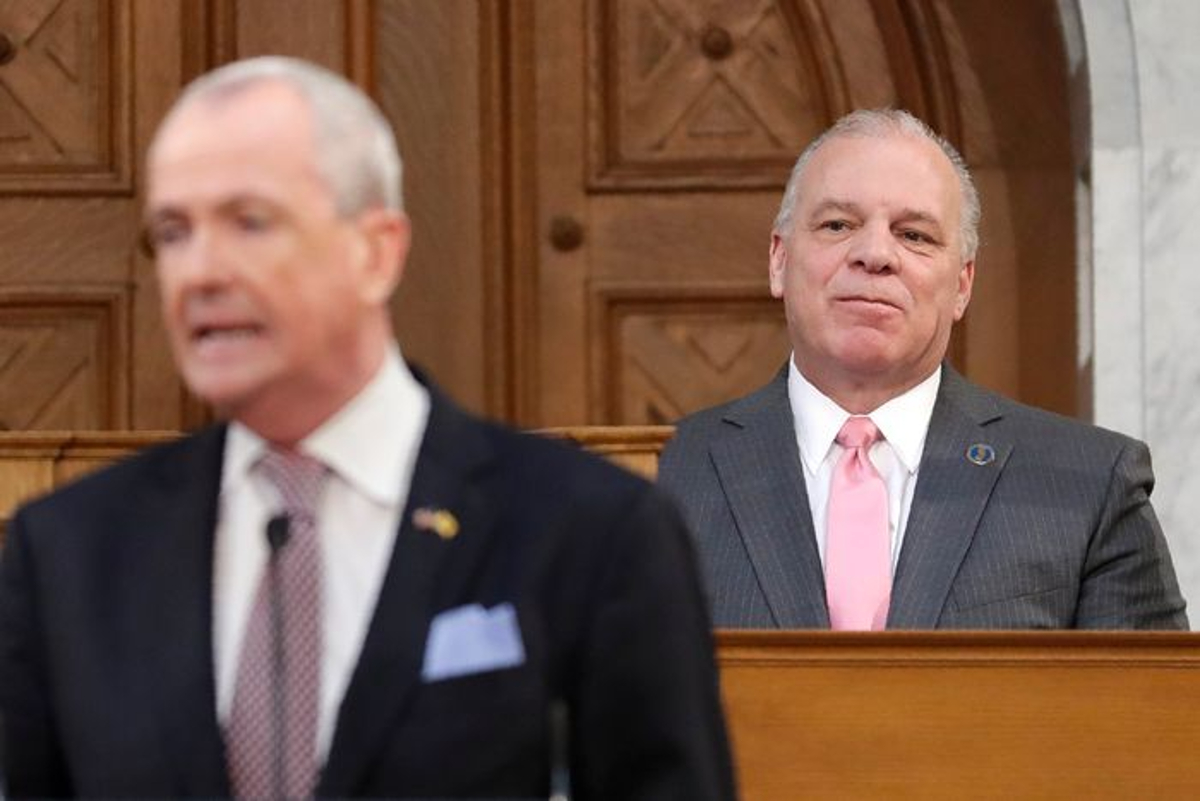 New Jersey’s much closer than anticipated gubernatorial race captured the headlines this week, and that pushed another high-profile Election Day outcome largely into the shadows. But anti-smoking advocates in Atlantic City are speaking out on the impact state Senate President Stephen Sweeney’s (D) nearly unthinkable loss could have on its goal of extinguishing tobacco smoke inside casinos.

New Jersey Senate President Stephen Sweeney is seen behind Gov. Phil Murphy in 2020. Sweeney was defeated during the 2021 election, which was one of the more surprising Nov. 2 outcomes, and the loss could impact casino smoking in Atlantic City. (Image: AP)

Sweeney, 62, has been one of the most powerful individuals in New Jersey for more than a decade. He’s been president of the New Jersey Senate since 2010, and has been the Democrats’ chief party representative in the Trenton capital since 2008.

Sweeney, who represents the state’s 3rd legislative district, which comprises all or parts of the southwestern counties of Cumberland, Gloucester, and Salem, has long been supportive of Atlantic City’s gaming industry.

He was responsible for developing the 2016 payment-in-lieu-of-taxes (PILOT) program that allowed the casinos to collectively pay at least $120 million annually to the state. The bill was in response to Atlantic City casinos challenging their property tax assessments, as the economy was raveling at the time and led to five casinos closing between 2014 and 2016.

Sweeney has been supportive of allowing Atlantic City casinos to continue allocating up to 25 percent of their gaming space for indoor smoking. His Election Day defeat means the industry will lose one of its biggest supporters early next year.

Sweeney, the longest-running state senate president in New Jersey history, was upset by Republican Edward Durr, 58, a truck driver who personally spent $153 on his campaign. Durr received 52 percent of the District 3 vote.

Casino Employees Against Smoking’s Effects (CEASE) says it hopes to work with Sweeney before he departs Trenton. Senate Bill 1878 has been floating around the Trenton capital since February of 2020. But the legislation, which would end the casino smoking loophole, has failed to gain any meaningful traction.

We ask Senator Sweeney to help us. We need action urgently. Please put our health first by passing S1878 — legislation to close the casino loophole — in the lame duck session. Governor Murphy has already said he’ll sign it. We will not rest until we are no longer forced to choose between our health and a paycheck,” a CEASE release stated.

The Americans for Nonsmokers’ Rights (ANR) shared that sentiment.

“Senator Sweeney has been a major obstacle for closing the casino loophole, but we hope we can work with him during the upcoming lame duck session to send the bill to Gov. Murphy’s desk, which the governor said he’ll sign. Casino workers cannot wait any longer and they should not be forced to choose between their health and a paycheck,” ANR President and CEO Cynthia Hallett told Casino.org.

Anti-smoking advocates argue that strong business experienced by the nine resorts during the smoking ban demonstrates that indoor tobacco permittance is not critical to the health of the gaming industry. Sweeney has repeatedly argued that it is, opting to stand with the Casino Association of New Jersey (CANJ) and its claims that “going completely nonsmoking would place Atlantic City casinos at a competitive disadvantage with other nearby casinos that allow smoking.”

Casinos in Delaware are completely smoke-free, but casinos in neighboring Pennsylvania are not.

2021-11-05
Previous Post: Piassek’s Plays: A Pair of Picks For the Breeders’ Cup
Next Post: Give Your Poker Skills a Workout in Pye’s Mixed Game Series