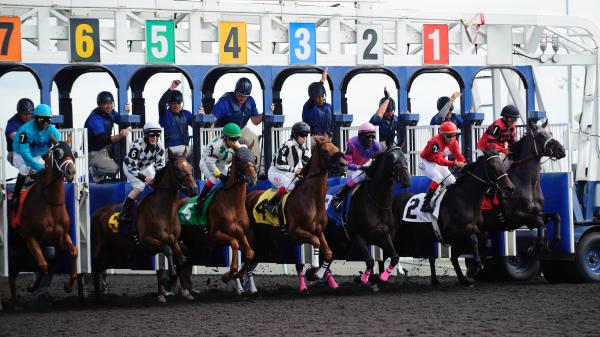 Woodbine Winners: Fourth Is the Charm for Jackpot Hi-5 Bounty

Woodbine Winners is an inside look at how horseplayers and bettors – from novices to pros – strike gold when playing the races at Woodbine. As part of the ongoing Woodbine Winners series, we’re going to show you tickets that result in life-changing scores, get insights into how the bets were made and learn more about the people who hit those winning tickets.

The last race each day at Woodbine features a wager called the Jackpot Hi-5. The wager can be played at a 20-cent base, and its objective is to pick the top five finishers in the race. The entire pool is paid off only if there is one unique winning ticket.

On Thursday, Nov. 11, a simulcast bettor at Arlington Park hit the Jackpot Hi-5 and took home more than $71,500. Here’s a look at their winning ticket.

The race: The final race on the Thursday card was a conditioned $5,000 claiming race for fillies and mares at 5 ½ furlongs on the synthetic main track. A field of 13 was entered, and one scratch brought the field down to 12.

This bettor took two very strong stands on their ticket. They keyed #9 Orbaline in the top spot, meaning that she had to win for this ticket to have a shot of cashing. She was a strong contender in this race, however. She had the best last-out Brisnet speed figure in the race, a 73. She earned that with a win in a non-winners of two claiming race last out. That made her the only horse in the field coming off a win, and the only one who had not lost at this level or at a similar condition. On both speed and class, Orbaline had the edge over her rivals. She went off as the 5.75-1 third choice, one of only three horses who went off at less than 10-1.

In the second spot, this bettor used four horses. They used #1 Tuscan Damsel, a 15.40-1 shot who had decent late speed and was making her fourth start after a long layoff, #2 Pierian, making her second start off a break at 10.45-1, #7 Gelato Amore, the 1.45-1 favorite who consistently runs figures in the 70s and was racing first off the claim, and #11 J M R Bold Vision, a 16.45-1 shot with early speed. If any of those four finished second, the bettor had a chance to cash.

This bettor used everyone except two horses in the third and fifth spot. One of the horses not used was Orbaline, who was keyed in the top spot. The other was #3 Savvy’s Sister, who was keyed in the fourth spot, an unusual move. This filly had shown good form over Woodbine’s synthetic track earlier in the year, but struggled in her last two starts on the dirt track at Fort Erie. She looked poised for a bounce-back race, at a generous 37.35-1. If she finished exactly fourth, it would dramatically increase the Hi-5 payoff, and potentially set the stage for a pool scoop.

With this ticket, this bettor zoned in on their strongest opinions, and spread themselves out elsewhere. For this ticket to have a chance, #9 had to finish first, and #3 had to finish fourth. However, they had more options in the second slot, with four different horses there, and anyone except #3 or #9 could finish third or fifth.

Orbaline stalked the pace and got up to win by a length. Tuscan Damsel closed from last and surged in the final strides to get second by a nose over Gelato Amore, who led early on and held on to finish third.

Savvy’s Sister, the longshot who had to finish fourth, made a decisive move turning for home and was racing in third for most of the final sixteenth. Had she gotten third, it would’ve ruined the ticket. Fortunately for the winning bettor, the wire came in the perfect spot. Tuscan Damsel rallied past Savvy’s Sister in the final few strides to get second, while the wire came just in time for Gelato Amore to hang on to third. Had the finish line been just a few feet further away, Savvy’s Sister would’ve surged past and gotten third.

26.95-1 Onezy’s Dream won a photo for fifth over 3.70-1 Sea Anna’s Dream, completing a gigantic Hi-5 win. Had Sea Anna’s Dream gotten up for fifth, the bettor still would’ve cashed, but it may not have been for the whole jackpot. Instead, the entire pool minus takeout – over $71,500 – went in this sharp horseplayer’s account. Given the way this winning ticket was constructed, there’s a chance the bettor also entered in a ticket (or tickets) with the longshot #3 Savvy’s Sister finishing second, third, or even fifth. But fourth turned out to be the charm in this case.