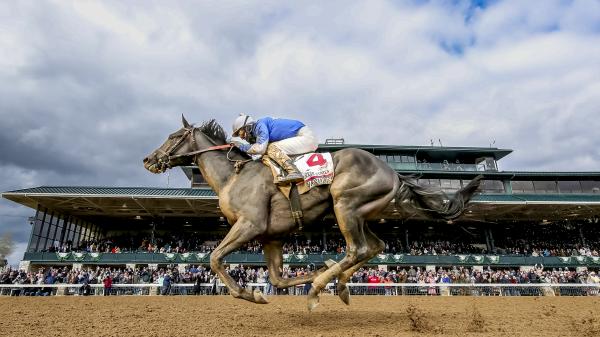 Jeff Drown’s Zandon, hampered by misfortune in his first two stakes attempts, looked in danger of being cursed again when shuffled back to last during the $1 million Toyota Blue Grass Stakes April 9 at Keeneland.

But this time, his talent was enough to offset poor racing luck. Knifing his way through traffic under Flavien Prat, he surged through the pack to catch favored Smile Happy and pull away by 2 1/2 lengths. The victory earned him 100 qualifying points toward the Kentucky Derby Presented by Woodford Reserve May 7 at Churchill Downs, where he figures to be one of the popular selections with the betting public.

Horseplayers also liked him a bunch Saturday, sending him off at 2-1 odds, just behind Smile Happy at 9-5. He gave his backers plenty of anxious moments over the first minute of the 1 1/8-mile contest.

Breaking slowly, as he did in the Feb. 19 Risen Star Stakes Presented by Lamarque Ford at Fair Grounds when third in his season debut, he recovered in the Blue Grass to lead a few horses into the first of two turns. But it wasn’t for long.

But once a hole materialized, the Upstart colt responded, blowing past horses late on the second turn, finding a seam in early stretch, and wearing down Smile Happy in the final furlong under Prat.

“He broke just OK. Then I got myself covered up, so I was there with nothing I could do about it,” said Prat, who rode Zandon for the first time Saturday. “The pace was a bit slow, so I was wandering down the backside. But I was traveling super — it was just a matter of finding a gap and getting a clean run down the lane.”

Emmanuel settled for third, 3 3/4 lengths behind the runner-up and a half-length ahead of longshot Golden Glider.

The second through fourth runners earned qualifying points on a 40-20-10 basis toward the Derby, though of the losing horses, only Smile Happy (70 overall Derby points) is committed to the run for the roses.

Smile Happy won the Kentucky Jockey Club Stakes last fall at Churchill Downs after a maiden win at Keeneland. Then this year, he was second by 2 3/4 lengths to Epicenter in the Risen Star and a half-length ahead of slow-starting Zandon.

On Saturday, Smile Happy Raced closer to the pace than he did in the Risen Star, losing a bit of ground from a stalking position with a trip that kept him three- or four-wide under Corey Lanerie.

“I am not disappointed whatsoever,” said his trainer, Kenny McPeek. “I thought the timing of this race was good. I think the next race will be his best race.

“He got a little tired at the end. We will see how much water he drinks and how [tired] he is. This is a really good horse. This is only his fourth career start. I feel like I could win the Derby or the Preakness with this horse.”

Zandon’s trainer, Chad Brown, showed confidence in his 3-year-old in choosing to race him in a talent-laden Blue Grass, knowing Zandon possessed just 14 qualifying points before the race. Ten of those points were earned in the Risen Star, the other four in the Remsen Stakes when Zandon was edged by a nose and not elevated to first by New York stewards after receiving a late bump from victorious Mo Donegal.

“On the backside when he was losing position, I felt terrible because there’s no room for error when you are trying to get points to go to the Derby,” said Brown, who watched the race from Aqueduct. “Things looked grim halfway through the race, but the horse persevered.”

As soon as Golden Pal crossed the wire after an emphatic score in the 2021 Breeders’ Cup Turf Sprint, trainer Wesley Ward had one request for part-owner Michael Tabor of Coolmore—allow the horse to come back for another season.

Despite the Uncle Mo colt’s exorbitant value as a future stallion, the partners at Coolmore gave into Ward’s wishes and mapped out an ambitious global campaign for Golden Pal’s 4-year-old season. Those plans include a trip across the pond — third time’s the charm — for the King’s Stand Stakes at Royal Ascot and even a venture down under to showcase the colt’s brilliant speed for the Australian breeders, the turf sprint specialists of the world.

The handsome bay, accustomed to a period of time between races, returned with aplomb on Keeneland’s opening weekend, sailing to a facile 4 3/4-length triumph in the $350,000 Shakertown Stakes.

“[Golden Pal is] just a special horse,” Ward said. “My assistant Julio Garcia is the one that’s keeping him all together. Horses this fast can be a chore with injuries and Julio is a master with his hands. He gets him to relax in the morning and cruise around there and get him nice and fit to where he’s sound coming into this race.”

The Keeneland turf, drenched by a wintery mix of snow and rain over the weekend, was far from a concern for Ward as it was for his other rivals, as Golden Pal had previously captured last October’s Woodford Stakes presented by TVG on a course with more give in the ground. A Keeneland anomaly, Ward trains year-round at the Lexington track and frequently trains on the turf course.

“This is a beautiful turf course to run a horse this fast on,” said Ward. “I’m sure [Golden Pal is] going to come out of the race just as well as he came to it just because of the condition of the grass. I’m looking forward to getting over to Ascot and showing what he can do over there.”—Molly Rollins

It didn’t go exactly according to plan but in the end, Spendarella got the job done in the Appalachian Stakes Presented by Japan Racing Association, rallying to win by 1 3/4 lengths and remain undefeated on a frosty day in the Bluegrass.

A few snowflakes were flying as the eight 3-year-old fillies went into the starting gate for the one-mile test on the Keeneland turf, rated “good” after off-and-on rain throughout the week.

Jockey Tyler Gaffalione got Spendarella off cleanly but was unable to seize the lead that helped her to victory in her previous start, the March 5 Herecomesthebride Stakes at Gulfstream Park. Glenall got the jump on her rivals and led the way down the backstretch under Julien Leparoux, with Spendarella just behind.

When asked for her best turning for home, Spendarella quickly got by the leader and easily held off the late bid of Dolce Zel and jockey Irad Ortiz Jr. Skims came from next-to-last to finish third, another three-quarters of a length in arrears, as the mile went in 1:37.41.

Spendarella, a daughter of Karakontie out of the Unusual Heat mare Spanish Bunny, improved to 3-for-3 and trainer Graham Motion said her future appears unlimited. —Bob Kieckhefer

Just One Time Outkicks Bell’s the One in the Madison

In a battle of late runners, Just One Time outkicked Bell’s the One by three-quarters of a length to win the $500,000 Madison Stakes.

The 4-year-old Not This Time filly notched the first top-level stakes victory of her career, racing seven furlongs on a wet-fast track in 1:22.79. She paid $6.60 to win after late money poured in on her, resulting in her starting as a slight favorite. Brad Cox trains the winner for Warriors Reward LLC and Todd Mostoller’s Commonwealth New Era Racing.

The victory was foretold by the score of his younger half-brother, Emirates Road, who won the day’s second race, a maiden special weight at the Lexington track. Both are out of the Ghostzapper mare Enrichment , now a producer of three stakes winners. Enrichment is a daughter of Sahara Gold, a Grade 2 winner at Keeneland in 2000 for Robert McNair’s Stonerside Stable. Prevalence, the 5-2 second choice, was a 2 1/2-length winner of the Commonwealth over 45-1 outsider Long Range Toddy.—Evan Hammonds

2022-04-10
Previous Post: JACK Poker Room in Cleveland Celebrates Reopening with a Party
Next Post: All square in title battle, big wins for Spurs and Everton