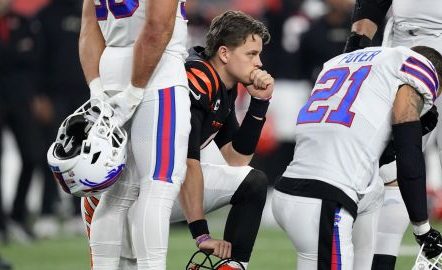 Buffalo will meet the Bengals in the divisional round of the 2023 NFL Playoffs, exactly 20 days after Bills safety Damar Hamlin had a heart attack and passed out on the field during a Monday night game in Cincinnati. Josh Allen and the Bills want to return to the AFC Championship game after a one-year absence, while Cincinnati seeks to advance to the conference championship game behind Joe Burrow for the second time in as many years.

Buffalo began the season with a superb 6-1 record and was the betting favorite to represent the AFC in Super Bowl 57. Cincinnati had a rough start to the season, going only 2-3, but the Bengals turned things around after they got healthy, winning an incredible nine straight games and moving up to +800 to win the Super Bowl at SportsBetting.ag.

Two things to watch when Bengals play the Bills

Can Burrow be shielded by the Bengals’ offensive line?

Burrow’s “Joe-Cool” persona follows him, but this week, poor pass protection may come back to bite him. In the most important game of the season, Cincinnati may be missing three of its starting five offensive linemen, and Buffalo is coming off a four-sack victory over Miami in the wild-card round. Burrow has been sacked at least four times in each of the last five games, going 1-4.

Can Cincinnati’s offence sustain itself at Orchard Park?

The Bengals average 40.1 less running yards and 22.3 fewer passing yards per away game than they do at home, in addition to scoring four fewer points a game on the road than they do at home. Ja’Marr Chase and Tee Higgins, two of Cincinnati’s greatest playmakers, will need to step up against Buffalo’s secondary, which has been the most banged-up in the NFL this season.

Bengals supporters should be much more anxious about Joe Burrow’s pass protection than Bills supporters should be about Josh Allen’s ball security. The Bills’ advantage of playing at home is also extremely important, particularly now that Damar Hamlin’s return has given them so much motivation. Recall that Buffalo has a 7-1 record at Orchard Park this year. Even yet, Burrow has an embarrassing number of pass-catching options that can at least keep up with Allen, Diggs, and Davis and make this the kind of game that everyone was expecting the Monday Night Football matchup between these teams on Jan. 2 would be.

We are picking Burrow to again cover the spread because he was 19-3 against the spread in his previous 23 starts coming into the playoffs. However, we anticipate the Bills to come out on top, helping to secure the first neutral-site AFC Championship game in NFL history and laying the groundwork for Allen-Mahomes 3.0.