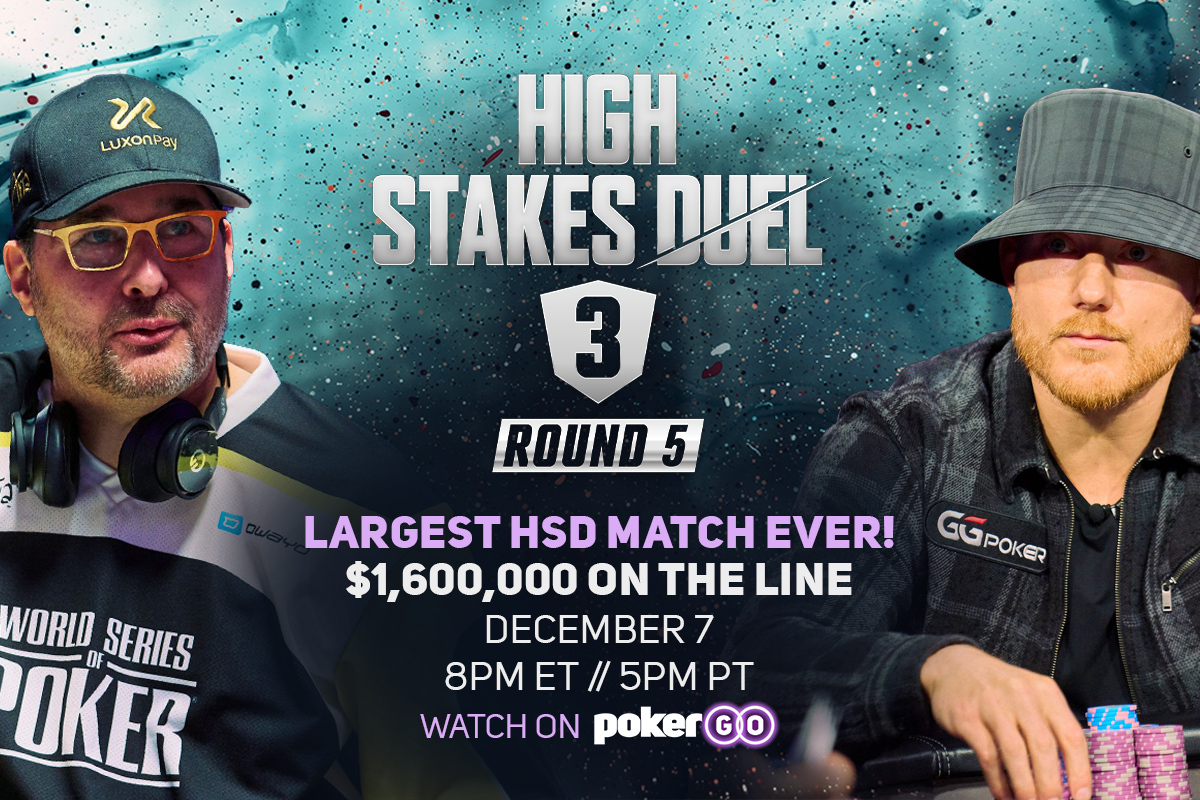 Jason Koon will try to derail the Phil Hellmuth hype train on December 7 when the two pros clash in a High Stakes Duel showdown worth $1.6 million.

Phil Hellmuth and Jason Koon will play heads-up for $1.6 million in the fifth round of PokerGo’s High Stakes Duel 3. (Image: PokerGo)

Hellmuth is the first and, so far, only king of High Stakes Duel. The PokerGo competition premiered in July 2020 with Hellmuth taking on Antonio Esfandiari in three heads-up sit & go matches.

The self-proclaimed Poker Brat has amassed a near-perfect record since then, but all that could change when he takes on GGPoker ambassador Jason Koon. The two pros will each buy in for $800,000 and the winner gets the lot.

Koon comes into the match with an impressive record that includes live tournament earnings of more than $40 million. However, almost all of Hellmuth’s previous opponents had world-class résumés.

With names such as Esfandiari, Daniel Negreanu, Tom Dwan, and Scott Seiver on the list of defeated opponents, there aren’t many, if any, people who can make Hellmuth nervous. Indeed, when it comes to the High Stakes Duel format, he’s proved extremely adept.

Hellmuth swept Esfandiari during High Stakes Duel 1. It was more of the same against Negreanu in High Stakes Duel 2. The two players anted up $50,000 each in Round 1 and Hellmuth got the win. The stakes were raised to $100,000 for the second match and, again, it was the same result.

The third match saw Hellmuth and Negreanu put $200,000 apiece into the pot. Negreanu, as he’d done in the previous rounds, started strong and took control. However, a few fortune hands allowed Hellmuth to seize control and, eventually, get the win.

Despite enjoying some lucky breaks during his trio of matches against Negreanu, Hellmuth proved superior overall and claimed his second High Stakes Duel belt.

The third season opened with Hellmuth taking on sports broadcaster Nick Wright. He came through that comfortably but had it much tougher in the next round.

Tom Dwan entered the PokerGo arena with a formidable reputation. Add to this a history of needle between the two players, and the match was as entertaining as it was unpredictable. Dwan won the $200,000 match and it looked as though Hellmuth’s run was coming to an end.

Dwan was unable to play the return match, so Scott Seiver stepped up. Both players paid $400,000 to contest Round 4 and, based on results in open events, many thought Seiver would win. But, true to form, Hellmuth beat the odds and secured an $800,000 victory.

He’ll now face another high-caliber opponent in Jason Koon. This time, the buy-in is $800,000, which means the winner of Helmuth vs. Koon will bank $1.6 million. Koon has won 20 live tournaments, including high roller events with buy-ins of $100,000 and higher. He’s also a regular in some of the biggest cash games in the world.

Koon could be heir to High Stakes Duel throne

However, perhaps the most significant result on his record is the 2021 WSOP Heads-Up Championship. Koon topped a field of 57 entrants in the $25,000 tournament to win his first bracelet and $243,981.

Based on this alone, Koon is clearly proficient in the art of heads-up play. What’s more, with over $40 million in live earnings and a big enough bankroll to play cash games where pots top $1 million, it’s unlikely the buy-in will faze him.

But, as we know, Hellmuth has certain skills that make him a nightmare to play against in this format. This, combined with the fact he’s won nine out of 10 High Stakes Duel matches, means it will be a close contest.

Who will come out on top? Who will have to pay $1.6 million to avenge their loss? We’ll find out when Round 5 of High Stakes Duel 3 goes down in December.

You can watch the action live on YouTube and PokerGo. The broadcast starts at 8 pm ET (5 pm PT) on December 7. The first hour will be free to watch on YouTube, the remainder of the match will only be available to PokerGo subscribers.

2022-11-30
Previous Post: Serbia vs Switzerland 2022 World Cup Odds, Time, and Prediction
Next Post: A Guide to the Season of Change in Horse Racing