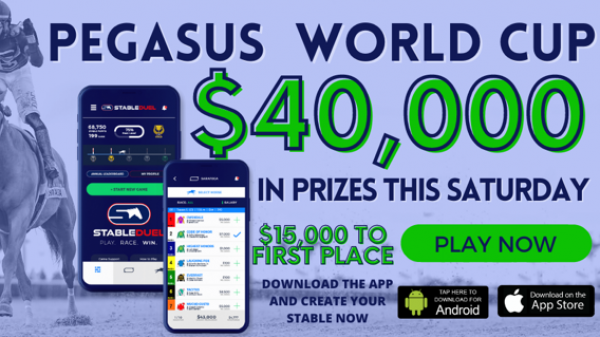 Saturday, Jan. 29, is Pegasus World Cup day at Gulfstream Park and StableDuel will have their biggest payout ever! The entry fee is $50 with $40,000 in prizes to the top 90 finishers with $15K going to the top spot.

StableDuel is a horse racing contest APP with a format similar to that of daily fantasy. You build your lineup based on a salary cap, so you won’t be able to just pick the most obvious horses or the most likely winners in every race. You’ll have to get a little creative and think outside the box in some races in order to stay under the salary cap. You receive points when any of your horses finish in the top five, so even if you have one race where a horse gets into trouble or you are a little unlucky, you still will be rewarded for the strong opinion that you have if they run well.

I’m sure many of us have had plenty of instances when we played a Pick 4 and went three out of four or played a Pick 5 and picked four out of five winners and ended up with nothing. In StableDuel, you could not have one winner all day but horses in your lineup finished second, third, fourth, which means you picked up points each race along the way and still won money in a contest.

When you handicap a racetrack card for a StableDuel contest, your opinion will be rewarded more than in any other wagers. On Saturday, I’ll be entering the big Pegasus game at Gulfstream Park! With $40,000 being offered in cash prizes it’s a great opportunity for all of you to play along. A huge stakes card with lots of familiar names! Let’s take a look at a couple horses that I’ll be using in my lineups on Saturday.

I was a big fan of this filly a few years back. She’s a multiple graded stakes winner that is very talented. She started to tail off at the end of 2020 against some very tough company. She came back after a long layoff in the middle of 2021 and just didn’t run well at all. She was sent to the bench for a while, returned a few weeks ago with a really nice effort. She just started to get going late and that was her first start six months after a long layoff, so expect her to take a massive step forward out of that race. She should have a ton more bottom and she’s a classy individual.

It’s been a very unlucky last few months for this fella, who was poised for a big effort in the Breeders’ Cup but had to scratch just a few days before after a small issue. He came back ready to roll on opening day at Santa Anita but the rain took the races off the grass so they had to scratch him out of that spot. They were looking around for a softer spot, but this race fits him well, so they head out here. Training well and, from a class perspective, he really fits. He has to prove that he can run as well outside of California and that he can perform as well at nine furlongs, but those factors are built into that 8-1 price. Sneaky troubled trip last we saw, he’s kept company with some nice milers out in Southern California. Very capable barn that does well with their limited stock. This guy has a big shot at 8-1 on the morning line and will only cost you $3,000 in your StableDuel lineup.

2022-01-28
Previous Post: PokerNews Podcast: Dwan Downed By Hellmuth, Bally’s to Become Horseshoe
Next Post: A Den draw the headline in a 12/1 weekend wager