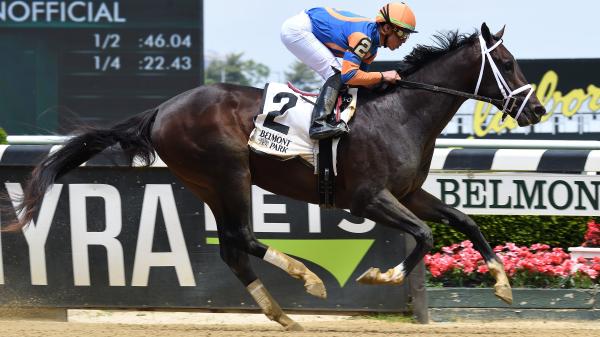 Without a 2-year-old maiden special weight event on Saturday’s card at Saratoga Race Course, juvenile focus shifts squarely on the $175,000 Sanford Stakes. We have a quality field of 12 horses entered for the Grade 3 race, and so it might be curious for me to land on the 5-2 morning-line favorite, but hey, can you blame me? I was told about this colt and how pleasing his debut was … directly from his Hall of Fame trainer, Todd Pletcher.

Forte rewarded the faith of his connections and bettors, scoring at first asking by 7 3/4 lengths, when bet down to 1-5 odds. He also did so in a professional manner, racing a few lengths off the pace before launching his bid. With a lot of speed assigned in the Sanford and an extra furlong with which to play, he appears all the more formidable, especially when you factor in the pedigree, as well.

Forte is a son of another Todd Pletcher trainee, Violence, who actually won his own debut at Saratoga before going on to score in the Grade 2 Nashua Stakes at Aqueduct and the Grade 1 CashCall Futurity on the synthetic at Hollywood Park. In the last start of his career, he finished just a half-length behind eventual Kentucky Derby Presented by Yum! Brands winner Orb in the Grade 2 Besilu Stables Fountain of Youth Stakes at Gulfstream Park. Forte’s broodmare sire (maternal grandfather), 2010 champion older male Blame, also had success at Saratoga, counting amongst his many wins the Curlin Stakes and the Grade 1 Whitney Handicap. Impressive, to be sure, but also quite noteworthy is Forte’s female family, a term used to describe not just his mother, her mother and so on, but the horses who branch from their generational line.

At first glance, one sees turf influence. Forte’s mother, Queen Caroline, had two unsuccessful starts on dirt before waking up, big time, with a switch to grass. She became a multiple stakes-winner on the green. Her own mother, Queens Plaza, actually put up her best speed figures on turf, despite having won the Sorority Stakes on the dirt at Monmouth Park.

If those names weren’t impressive enough, another star produced from this female family is recent two-time champion Essential Quality, whose mother, Delightful Quality, is also a daughter of Contrive, making her a half-sister to Folklore. Essential Quality won the first five starts of his career, including the Grade 1 TVG Breeders’ Cup Juvenile presented by Thoroughbred Aftercare Alliance and, as a 3-year-old, the Grade 2 Toyota Blue Grass Stakes. He finished fourth in the 2021 Kentucky Derby ahead of collecting a natural hat trick, rolling in the Grade 1 Belmont Stakes, Grade 2 Jim Dandy Stakes, and Grade 1 Runhappy Travers Stakes, the latter two contested at Saratoga.

Forte’s female family is one boasting win-early ability, Grade 1 class, and an affinity for Saratoga Race Course itself. With that in mind, in addition to belonging to a Hall of Fame barn, getting what appears to be an ideal pace set-up, and more ground to traverse, it seems mighty likely we will see Forte continue to prove aptly named.