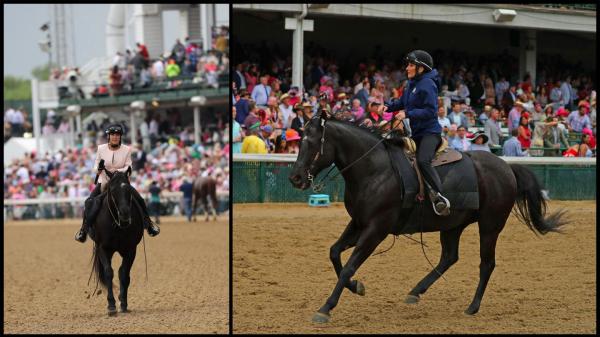 Sherman So Much More Than Lovable Tank for Moquett Barn, Donna Brothers

Sometimes in life you just need one look to know. In 2012, Laura Main-Moquett was moving jumpers from Delaware. “I stashed them at my friend’s place. As I was driving out, I just saw this big, gorgeous black horse out in the field. He was on a hill grazing, with the sunlight beaming down on him just like God’s rays.”

“I sent a picture to my friend and said, ‘Who the Hell is this? Where has he been all my life?’

“That’s Sherman,” her friend explained. “He’s getting on a trailer tomorrow and we are taking him to Oklahoma to put him in a horse sale.”

Main-Moquett couldn’t respond fast enough. “Hold that thought. Can I come ride him tonight?” She was at a steakhouse for her birthday dinner with her husband, trainer Ron Moquett.  She asked him “Do you want to go ride a horse? So, we did, for my birthday. It was great! He didn’t go to the auction. He found his place on the racetrack.”

This is how they brought Sherman to his new home. His original registered Quarter-Horse name was My Best Side (by The Down Side out of Sheza Fast Image, by Heza Fast Man). He was foaled on Feb. 12, 2006, in Sunset, Texas.

“He came to us named Sherman because he is like the tank. He is super-wide. He is an absolute beast, but he found his place on the racetrack.”  They were patient with him. “It took a long time [for him to acclimatize] because he was an ex-racehorse. He had the same baggage that some Thoroughbreds have that they have to work through.”

What about the other star in the Moquett barn? “Sherman is a bit like Whitmore where they think that they are both absolute bosses. When he was ponying Whitmore, one of them had to be the boss. We were walking past the horses at Oaklawn Park. I have no idea what Whitmore ‘said’ to Sherman. He took off running away from Whitmore. We were just walking, and suddenly he bolts forward straight into traffic. Whitmore must have said something terrible to him.” She thinks that there might have been a little smack talking between the two. But overall, they managed to work it out and get along.

Leslie McCall rides him every morning for the Moquett barn. McCall is the winner of the 2019 Thoroughbred Industry Employee Award (TIEA) Dedication to Racing Award. “They are a good team. They babysit every horse for us. They take care of all of us. He is such a good dude who does his job every morning.”

One person who agrees with that assessment is NBC analyst Donna Brothers. In 2014, Brothers was honored as “Best Sideline Reporter,” by Sports Illustrated.  As NBC’s on-track reporter, she interviews jockeys before and after major races.

Sherman and Brothers are a perfect combination. “Sherman is THE best. He’s the horse I’ve been riding to cover the Oaks and Derby for the past 5 to 7 years. Every time I ride him, I suddenly miss riding (regularly). He reminds me of everything I love about horses, which is namely that they are capable of running faster and longer and jumping higher than we can. Then they are kind enough to let us jump on their backs and go along for the ride.

“Plus, Sherman is kind and generous. He would literally run through fire for his rider, not because it seems like a good idea, but because you’ve asked him to do it. He is one of the great joys in my Kentucky Oaks and Derby Coverage.”

At the 2022 Kentucky Oaks, they worked in tandem while matching pace next to sometimes excited Thoroughbreds. With a microphone In one hand and reins in the other, Brothers guided Sherman alongside while interviewing winning jockeys. She was pleased with his performance. “Sherman is just so dependable. He has his moments and if you look closely you’ll see he’s wearing earplugs. He WANTS to please and that’s really the best you can ask for.”

The big tank of a horse is rock solid every day at the track, whether he is in front of 100,000 people, on camera, at morning workouts, or giving kids a ride in the shedrow at Christmas time in Oaklawn. Main-Moquett certainly knew he was something special when she caught a glimpse of him in the golden rays of evening sunlight. Sherman the Tank found his family and his place in the spotlight of horse racing.