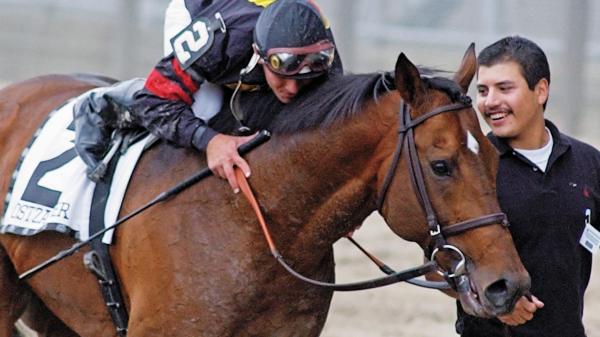 This marks the latest edition of “Stackin’ Cheddar: Looking Back”, a new biweekly series on America’s Best Racing. Here, we’ll look back on an early race in the careers of some of the greatest horses of all time, including spots where they went off at a big price.

When racing fans think of brilliance and precocity, Ghostzapper comes to mind. His career was sporadic, as he raced just eleven times in a 2 ½-year stretch. However, the Frank Stronach homebred made the most of his starts, winning nine races including four Grade 1 stakes. He won the 2004 Philip H. Iselin Breeders’ Cup Handicap at Monmouth Park with a Beyer Speed Figure of 128, the highest mark of any horse in the last 30 years. Ghostzapper capped off his Horse of the Year-winning season a few months later with a dominant win in the Breeders’ Cup Classic at Lone Star Park, covering 1 ¼ miles in a Breeders’ Cup record 1:59.02.

Few could have forecasted such an amazing career when he debuted on a fall Saturday at the now-closed Hollywood Park. The sixth race that day drew a field of ten 2-year-olds, eight of whom were making their career debut. Ghostzapper had a string of sharp five-furlong workouts prior to this race for Hall of Fame trainer Bobby Frankel. He was also a half-brother (same dam [mother], different sire [father]) of Grade 1 winner City Zip. Although the colt was 5-1 on the morning line, bettors were not convinced and sent him off at 11.50-1.

Those who overlooked him soon regretted it, as Ghostzapper ran off the screen that day. He stalked the pace off the inside and moved three-wide after the leaders on the turn. Then, the bay colt easily took command and drew away to win by nine lengths. He went 6 ½ furlongs in an impressive 1:15.57, earning a Beyer of 99.

Ghostzapper finished off the board in his next start, sending him to the sidelines for several months. He returned in June 2003 with a 3 ¼-length win in an allowance race at Belmont Park. After some impressive sprint performances, he stretched out to a route for the first time in the Iselin, and the rest is history. Ghostzapper was inducted into the Racing Hall of Fame in 2012.